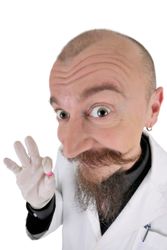 Statin Dangers!
The Side Effects of Statin Medications.

Statins are expensive drugs and they make the pharmaceutical companies big, big money.

And this money is the one and only reason these companies are pushing these drugs so hard.

And boy have they been pushing lately!

The recommended upper limit for LDL cholesterol is 100.

Now all of a sudden, there's a new push for the ridiculously low level of 70.

Do you know anyone who has an LDL cholesterol number below 70?

At 70 plus, I bet you can guess what people are now being urged to do?

That's going to work out just great for the drug companies, isn't it…those guys are so smart.

They're going to make boatloads of cash on this one.

I bet you're saying this to yourself right now...

They won't get away with this!

We have the American Heart Association on our side…and our doctors too.

The American Heart Association receives millions of dollars in annual funding from the big drug companies.

The AHA is like any other organism….it will do whatever it has to do to survive.

That includes sacrificing the American people in order to keep those funds coming in.

These guys are in bed with the drug companies for good, trust me.

They are THE driving force behind these new guidelines.

So much for the AHA.

But what about our doctors?

Don't get your hopes up.

Like puppies, the medical community has been lapping at the heals of the drug companies for years.

As a result, many doctors have treated this new lower target like a proclamation from god himself.

And they are writing the prescriptions at record numbers to prove it.

Let's give the drugs to overweight children starting at the wee age of 8 years old.

You heard me right, 8 years old.

One statin, Pravachol, has already been approved by the Food and Drug Administration for use in children.

But I have a better plan….

Instead of drugging that child, how about we get the cupcake out of his mouth, the TV remote out of his hand, and the couch off of his backside.

Feed him real food, get him outside to exercise like children are supposed to do, and presto, problem solved.

This hysterical rush to get every ones cholesterol as low as possible has no good science to back it up.

Then read this gem…

In a study done with nearly 137,000 Americans hospitalized for heart attacks between 2000 and 2006, 72 percent had LDL levels below the recommended guidelines.

Read that one more time so it REALLY sinks in...

Now, let me ask you….what else do you need to know?

I'm going to leave you with a few facts on the dangers of low cholesterol...

They found that brain cells with low levels of cholesterol have fewer than normal receptors for the mood-elevating neurotransmitter serotonin.

This causes many problems.

One of them is an increased risk of suicide.

A french study that tracked 6,393 men found that those with the lowest cholesterol levels were 3 times more likely than the other men to kill themselves.

Vivian Mitropoulou, Ph.D., who is studying the link between cholesterol levels and personality disorders at Mount Sinai School of Medicine in New York, had this to say about those taking cholesterol lowering medications...

The alarm sounded in the mid-1980s, after researchers began testing the first drugs designed to lower levels of cholesterol. People taking these drugs began dying at an unusually high rate from causes unrelated to cardiovascular disease. A lot of them seemed to be smashing their cars into bridges and doing all sorts of impulsive and violent things.

Doctor Peter Langsjoehn a physician out of Tyler, Texas, believes that statin use actually contributes to heart failure…

I have seen a frightening increase in heart failure secondary to statin usage. Over the past five years, statins have become more potent, are being prescribed in higher doses, and are being used with reckless abandon in the elderly and in patients with 'normal' cholesterol levels. We are in the midst of a HF epidemic in the US with a dramatic increase over the past decade. Are we causing this epidemic through our zealous use of statins? In large part I think the answer is yes.

If you're a statin user and would like to get this drug out of your life, follow the link below to view a product I highly recommend...

Jump to The Great Cholesterol Lie

Statin dangers to STATINS SIDE EFFECTS