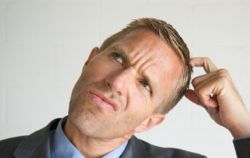 Click Here to read about The Great Cholesterol Lie

Next to muscle pain and weakness, memory problems are the second most common side effect of Lipitor, Zocor, and other cholesterol lowering statin drugs.

I wonder how many Alzheimer's and Dementia cases would disappear if statins were banned worldwide.

Here's an excerpt from an article published in the September 8th edition of the Star Ledger.

The heat coiled around Lori Elbertson as she stood in the parking lot, suddenly at a loss for why she was there.

Panicked, she hurried back to the conference room inside the South Jersey hospital where she had been attending a meeting.

For the next hour she sat with two friends, trying to reconstruct her identity:

I'm Lori Elbertson. I have a 2-year-old daughter, Brianna, and a husband, Darrin, and I live at ...

After that day in May 2003, Elbertson, a 41-year-old health care administrator, struggled to recall the simplest things -- sometimes just a word or a name -- while doctors tried to understand the reason for her memory loss.

It wasn't until two years later that Elbertson and her physician began to suspect her problem was related to a cholesterol-lowering medication called Zocor."

All was well until six weeks later, when my wife found me walking aimlessly about the yard after I returned from my usual walk in the woods.

I did not recognize her, and only reluctantly accepted cookies & milk--but refused to go into my now unfamiliar home.

I "awoke" six hours later in the office of the examining Neurologist with a diagnosis of transient global amnesia, cause unknown. An MRI performed several days later was normal.

Since Lipitor was the only new medicine I was taking, the doctor in me suspected a possible side effect of this drug. Despite the arguments of the examining doctors that statin drugs just did not do this, I stopped my Lipitor.

Here are some common memory loss complaints among statin users...

Jump to The Great Cholesterol Lie

Jump to Statins and Boost Your Low Testosterone